Loan: ‘Enid Marx: Print, Pattern and Popular Art’ at The House of Illustration (2018)

Designs, a book and a textile from our collection joined over 150 pieces from private and public collections to celebrate the work of mid-century designer Enid Marx

You may not have heard her name before, but it is likely that you have come across her work, so ubiquitous are her designs. But the ordinary uses to which her designs were put may have resulted in Enid Marx (1902-1998) being overlooked as an influential designer of the twentieth century. House of Illustration’s exhibition looks to put this right and to celebrate her work by bringing together over 150 pieces from private and public collections, including a few pieces from MoDA.

Our collection includes these five of Marx’s designs for furnishing fabrics in 1946 as a member of Gordon Russell’s Board of Trade Utility Furniture Team, which are on loan to the exhibition. 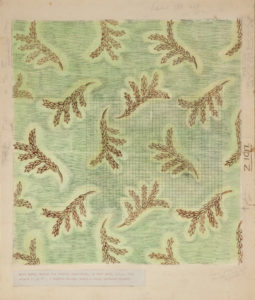 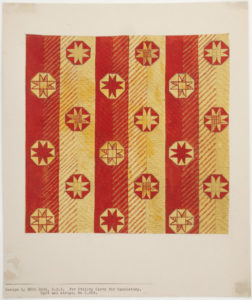 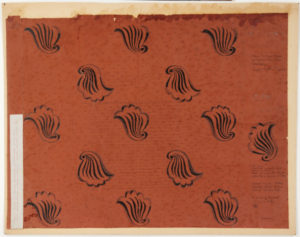 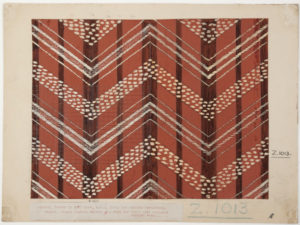 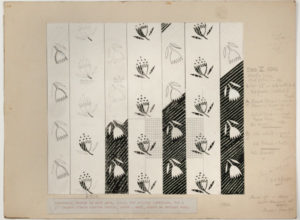 Towards the end of the war Sir Gordon Russell, RDI invited Marx to join the Design Panel of the Utility Committee. The Board of Trade set up the Utility Design programme  during the early years of the Second World War both as a means of concentrating centres of production and as a means of restricting wastage of materials by imposing strict guidelines on the production of furniture and other goods. Marx’s textile designs were produced by Alastair Morton RDI at Morton Sundour and exhibited at Britain Can Make It (1946).

Another item that you can go and see in the exhibition is this moquette fabric, designed by Enid Marx in 1938 and used to re-upholster seating on the Piccadilly and Central line trains of the London Underground, as well as surface stock. Moquette is a hardwearing and durable fabric making it particularly suitable for the needs of public transport. Four moquette designers were commissioned by the London Passenger Transport Board in the 1930s, including Norbert Dutton and Paul Nash as well as Enid Marx. Four of Marx’s designs are known to have gone into use, including this one.

The final item we have loaned is a book, for which Enid Marx designed the cover. Penguin books produced a series of hardback illustrated monographs called the King Penguin series between 1939-1959. They were inspired by a German series called Insel-Bücherei published by Insel Verlag. These were Penguin’s first volumes with hard covers and their first with colour printing, and covered subjects of art, science, leisure, and world history. Other cover designers for the series included Marian Mahler, Edward Bawden, and Barbara Jones. Enid Marx designed the covers of five books in this series.

The exhibition as a whole shows the amazing range of Marx’s designs, from textile design and book illustration, to poster design, patterned paper and even stamps. It is co-curated by historian Dr Alan Powers, author of the first monograph on Marx recently published by Lund Humphries, and you can visit the House of Illustration to see it until 23rd September.

Find out more about Enid Marx in our digital stories section.