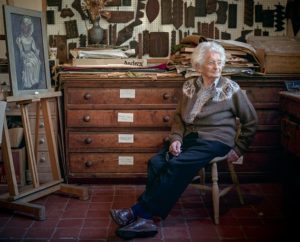 Some of the items we lent to the Enid Marx exhibition at the House of Illustration last year are on the road again, this time to the John Hansard Gallery in Southampton.  They will be featured as part of an exhibition called ‘Resist: be modern (again), curated by Alice Maude-Roxby of Middlesex University and Stefanie Seibold of the University of Art and Design in Linz, Austria.

This time the focus will not be on Enid Marx herself.  Instead the exhibition features the work of a number of female artists, writers, performers and editors from the 1920s and 1930s, including writer Virginia Woolf, textile designers Barron and Larcher, photographer Berenice Abbott and writer and art critic Elizabeth McCausland, among many others.  Many of these women were highly influential in their day but in many cases their work has been largely overlooked since then.

It will be great to see items from MoDA’s collections re-interpreted in the light of contemporary art practice.  The exhibition runs from 25 May until 17 August 2019, and we’re sure it will be well worth a trip to Southampton to see it.