I stand by a cold, sterile-white table in the Museum of Design and Architecture. I am watching Sim Panaser, a young, passionate Curator, as she gently places a large book on the table. This is my first visit to the museum, a friend of mine had praised their collection of interesting and quirky objects so I decided to visit.

The closed book before me has a smooth cover – a mixture of colours but rich lilac colour stands out to me. Dry, tea-brown pages are densely packed with splatters of tiny dark spots on the edges which I assume are stains. On the right side rests an adjustable, leather strap with a large square, silver buckle which firmly holds the book’s pages. There is no hint about what it is, no writing or images.

To me, it resembles an old-fashioned diary. It reminds me of the smaller diaries that I kept, particularly one that I had as a child, it was multi-coloured with a shiny, golden padlock. I wondered what sort of history, stories or perhaps secrets this book held. 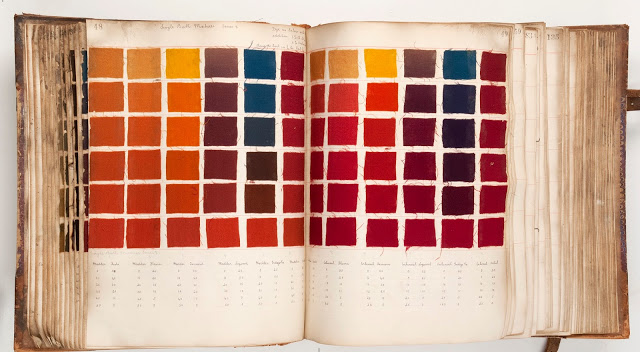 As Sim opened the book I saw a rows of fabric swatches, my eye scanned through the neatly drawn table that the swatches filled, noting how colours and tones varied. Inside and around the table were pencilled writing of letters and numbers. Sim explained that these were the chemical elements and measurements used to create the dyes, which were found in over one hundred pages, beside more than 200 colour samples that the book contains.

My interest in the book grew, Sim turned the pages as I looked on in wonder. A name had been handwritten in pencil, at the back of the hardcover – it read ‘Oswald Gunnell’. The name had been written on a manufacturer label dated 1894, in Leeds. I learnt that the Mr Gunnell had created the book initially as a hobby, working closely with a chemist to produce the dye samples in his home.

As you can imagine I had a lot of questions to ask Sim about Mr Gunnel. I wanted to learn more about him and why he had created the book. I decided then that I wanted to write about this unusual book for one of my university assignments. After I expressed my interest in the book, Sim decided to investigate further. We arranged a second visit. 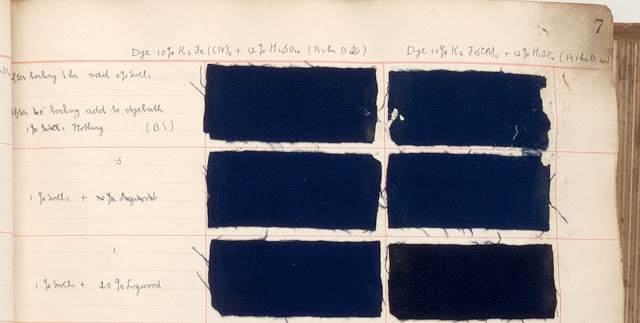 The blues, badda3192, Museum of Domestic Design and Architecture

A few weeks later, I stood looking at a computer screen carefully reading an article that Sim had found called ‘The Colouring Matter of Querbracho Colorado’. Sim stood beside me, I could sense her awaiting my reaction to something which made me speed up my reading pace. The article had been published by The Journal of the Chemical Society between 1878 – 1925, it was co-written by our Oswald Gunnell. I turned to Sim in disbelief, she simply smiled and nodded confirming without words what I was asking.

The topic of the article was about the dyeing properties of a tree known as Querbracho Colorado. One of the ingredients that was mentioned was ‘Alum’, an ingredient which also featured on page seventy-four of the dye book.

It soon became apparent that Mr Gunnell’s hobby eventually developed into something more significant. One of his co-authors, Arthur George Perkin had established G.F Perkins and Sons, a dye works in North West London. Sim opened a page in the first chapter of a book titled The Colour Revolution by Regina Lee Blaszczyk. Arthur George Perkin’s son, William Henry Perkin, had been noted as having ‘accidently synthesized a deep purple dye from coal waste’ helping to ‘establish the field of synthetic organic chemistry, and ushered in an era of rainbow colors’. 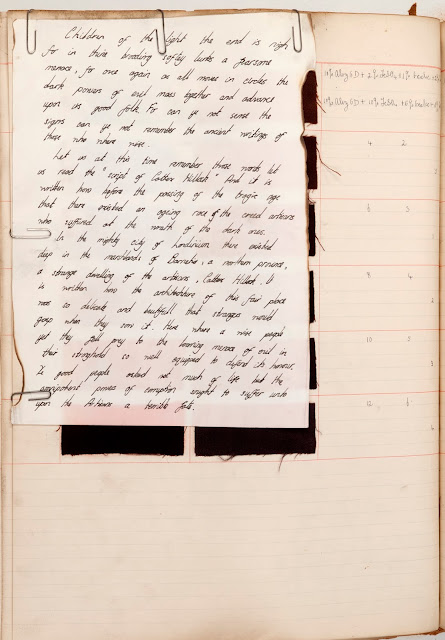 Children of the light…a note found inside the dye book

It was becoming apparent that Oswald Gunnell had established a strong connection to the dye industry. He became studious, gaining knowledge and applying it in his dye book. Sim then presented me with her final discovery – a patent by Mr Gunnell for a unique label, granted by the United States patent office in July 1928.

The label could be attached to dyed clothing and not absorb the dye. The patent was granted due to the pattern in the design of the label. On one of the patent sheets there was a diagram illustration showing the design of this unique label.

Both Sim and I were surprised and amazed to learn of how Oswald Gunnell’s initial hobby had lead him into the world of dye production. However, as I now stand looking through the book again from beginning to end, I notice how much busier and experimental Mr Gunnell became. The number of dyed swatches per page increases, the colours on the swatches are much richer and bolder.

The book is similar to a diary in the way that provides insight into the practice of its owner. Unlike a diary, it does not tell us the whole story behind the swatches and writing its owner produced instead it’s like a puzzle to a grander story. Nevertheless, it was these small details that initially drew me in – the mystery behind the dye book – ultimately, connecting the book to an extraordinarily unexpected story.

Posted in #Co-Creation, #CreativeWriting, #MDXstudents by Mike on September 2nd, 2015.