We have a guest blog post this week by one of MoDA’s regular study room visitors; Hollie Price who is a PhD student at Queen Mary University.

My PhD research focuses on representations of domestic life in British films released between 1930 and 1951. This was a period in which British cinema was considered to be in its golden years and when domestic life underwent dramatic shifts as a result of changes in consumer culture, women’s roles and the sudden national vulnerability brought about by wartime. My research examines themes of progress, class, ideals, nostalgia and gender roles using the depiction of home life, the domestic interior in British films and wider visual culture.

Magazines held in the MODA collections help me to reconstruct some of the key themes attached to the home in extra-filmic culture. Magazines including Homes & Gardens, Ideal Home, Good Housekeeping and House and Garden enable a view of the ideal home as it was being constructed in the pre-war, wartime and post-war periods. 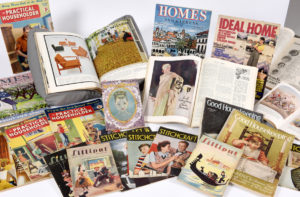 A selection of the magazine held by MoDA 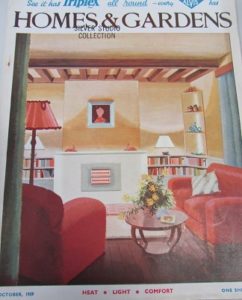 The magazine Picture Post is an equally invaluable resource in the MoDA collections as it presents a look at everyday realities of working class home life using articles and photographs to create a narrative for characters with whom readers could sympathise. In a brief example of how I am using the MoDA collections, I will demonstrate how two Picture Post magazines, published in 1939 and 1941, provide insight into the milieu of the industrial working class home, thus allowing a reading of John Baxter’s 1941 film, Love on the Dole, which features the same setting. 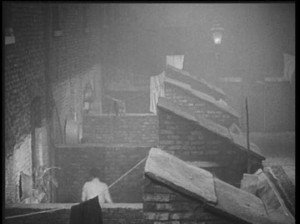 Set during the 1930s industrial depression, Love on the Dole depicts the trials of main characters, the Hardcastle family, in coping with everyday life as unemployment becomes an increasingly worrying prospect for the family. The film opens with  panoramic shots of the industrial topos of Hanky Park, Lancashire before cutting to Mrs Hardcastle sweeping the yard of the family home, then starting a fire in the grate of the kitchen-living room.

Although this room is cluttered with worn objects and dark corners, the Hardcastle’s breakfast table gleams with bright, white china and a clean tablecloth. Through their home, the Hardcastles are presented as figures of respectability, optimism and hope for the future, within the otherwise dark industrial surroundings outside.

Through their home, the Hardcastles are presented as figures of respectability, optimism and hope for the future, within the otherwise dark industrial surroundings outside.

Similarly to this shift from dark industrial landscape outside to respectable home within, a Picture Post article on unemployment – published February 19th, 1939 – was accompanied by a photograph showing a topos of chimneys and slag heaps. The article then promises a domestic haven from these conditions and states that: ‘Picture Post shows how the Ministry of Labour moves unemployed families from the Special Areas to districts where they can find work, or begin life again on homesteads’.

A photograph in this article titled ‘Their First Meal In Their New Home’, suggests a new life in the home characterised by air, light and good nutrition. These images play on the same contrast between industrial topos and the bright table top setting in Love on the Dole: suggesting a shared optimism that the home could be respectably maintained, or in this case reconstructed, in spite of bleak economic conditions. Grim environments inherited from the 1930s depression are shown to be solvable.

In a way similar to documentary films of the period about urban working class home such as The Planned Home (dir. Edward G. Moore, 1937), Picture Post enthusiastically demonstrates that the drab conditions of industrial working class life could be improved upon with a bright, well-planned home. In this 1941 issue of Picture Post, new, planned, more spacious and hygienic homes are described and pictured in an article by Elizabeth Denby, a housing consultant and designer.

Within these pages of Picture Post, bright views of future working class domesticity enable a re-situating of the onscreen home in Love on the Dole according to contemporary, publicised attitudes in the late 1930s. 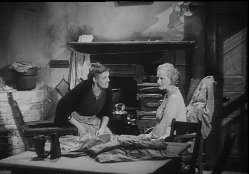 The bright table in the opening scene represents the aims of the modern movement and an idealistic view that community, home and health could be maintained even in otherwise bleak working conditions. Although with unemployment as a result of the Depression, in the final scene these standards have slipped. In another scene in the kitchen-living room, Mrs Hardcastle looks despondently on at a now ratty table, an unkempt room and what she describes as her now lost respectability.

The closing inter-title for Baxter’s film quotes from a statement made by Labour MP and first Lord of the Admiralty, A.V. Alexander, offering a final glimpse of optimism: “Our working men and women have responded magnificently to any and every call made upon them. Their reward must be a new Britain. Never again must the unemployed become forgotten men of the peace.”  Love on the Dole finally emphasises a reforming agenda, very much in the optimistic tone of Picture Post, and in doing so suggests that the now ragged home of the Hardcastles will not be repeated in a new, planned Britain, and in fact will be restored to the bright conditions apparent in the opening scene.

This analysis of Love on the Dole was presented in part at a postgraduate conference for the Centre for Studies of Home at the Geffrye Museum in September 2012.