MoDA holds a total of sixty Notgeld or 'emergency money' banknotes in the reference collection which belonged to the designer Charles Hasler. UCL student Sahava Baranow found out more about them. 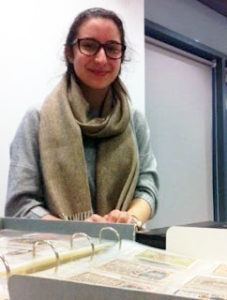 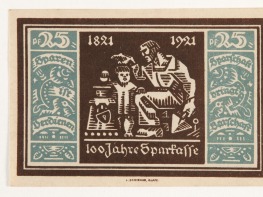 Notgeld was a kind of currency produced by German towns, villages and municipalities from the end of the First World War until the mid-1920s, when the state bank (Reichsbank), struggled with wartime shortages and post-war hyperinflation.

The notes are double-sided and printed with their monetary value, information about the village, town or province of issue and colourful illustrations.

Why were Notgeld needed?

During the war Germany’s population had to get used to substitute rubber from petroleum, substitute coffee from acorns, and even substitute clothing and underwear, made from paper. But above all, there was a desperate shortage of metal.  Early on in the war individuals began to collect small denomination Reichsmark coins, because the value of the metal that they were made from had exceeded their face value.

As the war progressed, metal was needed for more pressing purposes than currency, the production of war supplies, for example.

By 1919 low value coins had disappeared, and substitute money, Notgeld, made from paper rather than metal, was issued by municipalities and other regional bodies.

The text and images on Notgeld express regional memory and identity. They are illustrations of local pride, intended to promote a city’s attractions and stories. The notes were meant to awaken the curiosity of tourists and travellers, and to convey the civic pride of a town’s inhabitants. Through a glimpse at some of the banknotes, the public mood from a particular part of Germany becomes tangible. Some banknotes are highly humorous or sarcastic, even making fun of Notgeld itself. Others are more earnest, and then there are examples which are rather sober and less ornate. 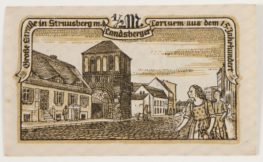 The city of Strausberg chose to show a view of its “great streets” and the Landsberger Torturm, a fortification tower from the 15th century.

END_OF_DOCUMENT_TOKEN_TO_BE_REPLACED 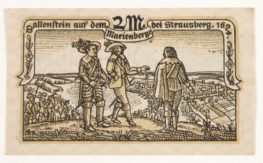 There is another banknote from Strausberg that illustrates the visit of the famous General Wallenstein in 1624. It highlights the town’s historic importance, as well as its idyllic beauty.

END_OF_DOCUMENT_TOKEN_TO_BE_REPLACED 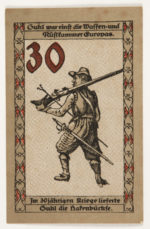 This banknote from Suhl displays an armed soldier, an indication of the town’s pride in its history and regional importance as the ‘armoury of Europe.’

END_OF_DOCUMENT_TOKEN_TO_BE_REPLACED

One glance at a piece of Notgeld can easily reveal the public mood from a particular region and time of Germany. This piece from Glatz (now Kłodzko, Poland) shows a man teaching a child to save money and store it safely in a piggy bank.

This note is much less colourful than many of the other notes in MoDA’s collection. It was printed during the hyperinflation and reflects the dire situation than many Germans experienced at this time.

END_OF_DOCUMENT_TOKEN_TO_BE_REPLACED

The front of this banknote from Tegernsee shows a beautiful landscape, emphasizing the impressive countryside around the lake. However, the back reads “Wer hätt’ je gedacht, dass in solchem G’wand ‘mal Mark u. Pfennig wandern im deutschen Land!“ (trans. Who would have ever thought that marks and pfennigs would wander around the German land in these clothes?) This rhyme  acknowledges the difficult situation of substitute money, but also ridicules the very concept of Notgeld.

END_OF_DOCUMENT_TOKEN_TO_BE_REPLACED 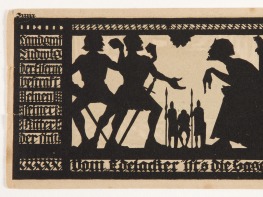 The town of Freyburg adorned this piece of Notgeld with the medieval tale of the Landgraf of Ludwig. It is a tale of oppression and the triumph of justice over evil. The story became a popular saga that was told in and around Freyburg and there are several well-known collectors of folk tales, including the Brothers Grimm, who recorded the tale in both prose and verse

END_OF_DOCUMENT_TOKEN_TO_BE_REPLACED

Distribution of Notgeld in MoDA's Collection

Since Notgeld notes were highly decorative and often humorous, they soon became collectors’ items – and still remain popular with collectors to this day.

When municipalities and other issuing bodies recognized the popularity of Notgeld, they continued to issue colourful banknotes specifically for collectors. These particular types of Notgeld are known as Serienscheine, (serial notes) as a number of banknotes were often printed in the form of a series that told a particular story. These collector notes were issued with a very short validity period and often they had already expired when the Notgeld was issued.

Serienscheine tend to be very well preserved and can be found all over the world as they never actually went into circulation, but were issued especially for collectors. 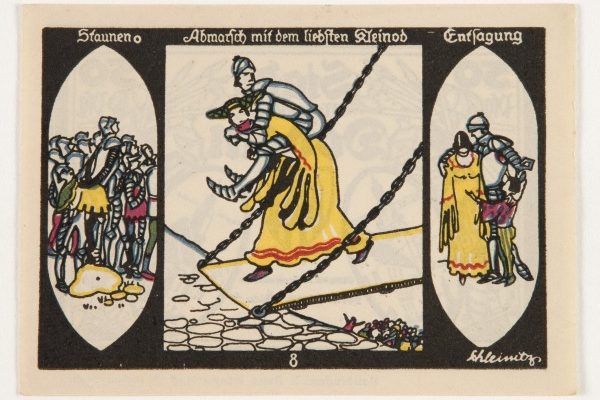 One example for such a series of Notgeld is this intricately illustrated banknote from Döbeln (CH 5/4/2/5/58). It is part of a series consisting of eight banknotes that tell the story of how the brave and loyal woman of Kriebstein managed to trick margrave Frederick the Warlike and the Elector of Saxony.

END_OF_DOCUMENT_TOKEN_TO_BE_REPLACED

Another example is this notgeld is from Schöppenstedt (CH/5/4/2/5/44). It is number six in a series of ten Notgeld exploring folklore about Schöppenstedt, and relates to a story (similar to one told about the citizens of Schilda) of the citizens hauling a cow up the side of the church in order for it to eat the beautiful grass growing up the wall of the church, resulting in the cow dying from hanging.

END_OF_DOCUMENT_TOKEN_TO_BE_REPLACED 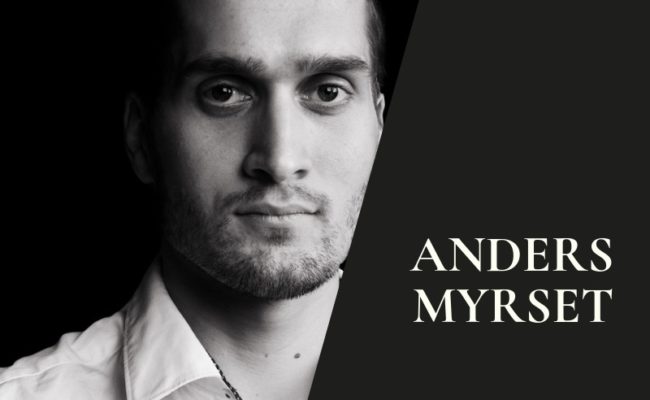 END_OF_DOCUMENT_TOKEN_TO_BE_REPLACED

Huge thanks to Sahava Baranow for her work on this project, especially for her expertise in providing translations of the German texts.