Lucy Ellis: the magazine of the wallpaper industry

I have always had an interest in the history of wallpaper, and I also have a background in retail. When I started my MA in the History of Design and Material Culture at the University of Brighton  in 2017, I was keen to bring these two things together.  So I was delighted to find a publication called The Wallpaper Magazine in MoDA’s collections. This proved to be a fascinating resource for research into wallpaper salesmanship between the wars.

My research made me realise just how much rich history is contained within trade journals and magazines: all the voices of the trade are there, from management through to decorators. We see them at work and at play through the advice features, technical instruction, sports and social reports, jokes and cartoons, all wrapped up in these wonderful ephemeral objects. 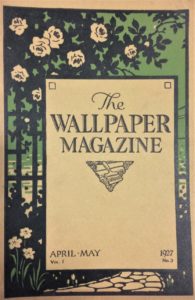 The Wallpaper Magazine was published in Britain from 1920-1939 by The Wallpaper Manufacturers Ltd (WPM), the dominant wallpaper company of the first half of the twentieth century.  The magazine was an in-house journal that sought to unite the industry. It was a conduit for enthusiastic (and at times intensely didactic) advice on how to maximise wallpaper sales.

When the magazine was launched in 1920 the wallpaper industry was recovering from a slump brought about by war and shortages of raw materials. The wallpaper industry also faced a hostile design climate in which critics, enthused by modernism, advocated abandoning wallpaper for plain painted walls.

In response, WPM used The Wallpaper Magazine to inform, educate and motivate the wallpaper salesman to ‘better business’. It was a means of conveying the new USA-led science of salesmanship to the independent decorator on the high street in order to revive the trade.

The magazines chart the growing importance of branding as a means of selling.  I was intrigued by the changing cover designs and how the tone of the magazine altered over the 1920s and 1930s.  In the 1920s the salesman was encouraged to see his (mainly female) customers as ‘unbelievers’. It was thought that they needed to be ‘educated’ into buying wallpaper. By the 1930s, there was a more moderate and sophisticated assessment of the client based on psychological profiling, a change reflected in the tone and content of these magazines.

I am very grateful to the Wallpaper History Society for awarding me the Merryl Huxtable Prize to support my research into inter-war wallpaper salesmanship.

Lucy’s research provides a fascinating insight into this often-overlooked aspect of the history of wallpaper. Her work used a detailed analysis of the magazines in MoDA’s collections to shed new light on how wallpaper was sold to consumers in the interwar period.

You can hear more about Lucy’s research in this short film made by Middlesex University TV Production students:

Posted in #Co-Creation, #Wallpaper by Zoe Hendon on January 7th, 2020.