Dr Keren Protheroe talks about her research on Winifred Mold, a designer working for the Silver Studio in the early twentieth century [Video].

Winifred Mold had a prolific career designing dress fabrics and furnishing textiles for the Silver Studio.  She was one of its longest-serving employees, beginning there in 1912 and continuing until 1935.Very little information has survived about Mold, but surviving examples of her work tell us a great deal about female designers and how fashion was consumed at that time. 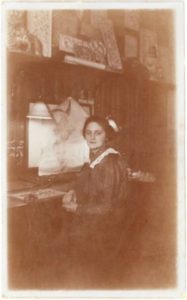 In the 1880s and 90s the Silver Studio did not employ female designers.  By the early twentieth century this rule had been relaxed, and Winifred Mold is one of seventeen women designers who appear in the Silver Studio’s records.

Other women working for the Studio include Madeleine Lawrence, Miss Simms, Miss Gilbert and Miss Fahey. In some instances only their first names were recorded, and the designs which survive in MoDA’s archives are the only record of the time these women spent working as designers for the Silver Studio.

Winifred Mold attended art classes at Paddington Technical College between 1909 and 1912, after which she began working for the Silver Studio. A close look at her designs shows the importance that was assigned to women designers as taste-makers during the period.

The floral frock became a stylish and versatile garment after the First World War which could cross the divide between formal occasions and everyday wear.

Popular notions of the natural world and the arts – their beauty and moral purity – were aligned with female sensibilities, and floral subjects were considered typically ‘feminine’. In this way, even as they had entered the workplace and gained financial independence, women’s equal involvement in the design profession was hindered by old expectations and views of ‘femininity’. 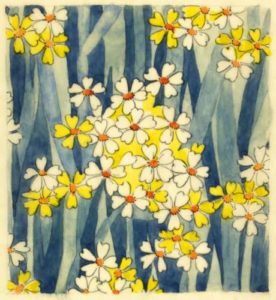 Dress print design of jonquil flowers with a background of stems, by Winifred Mold, 1931. SD10257

Women designers who worked for the Silver Studio tended to work from home, and received instructions by post from Rex Silver, head of the Studio.  Perhaps surprisingly, the marginal status of women in the profession has given us further clues about their design process at the Silver Studio.  Correspondence between Rex Silver and his female employees reveals much about the design process and the expectations placed on designers.

The Silver Studio remained by and large a male-dominated sphere, but Mold’s story, like that of other women designers of her generation, gives us an insight into their pursuit of a professional identity in the textile industry, which would pave the way for women’s greater influence on design.

Petal Power, a booklet about the work of the Silver Studio’s female designers, by Keren Protheroe, is available via our online shop.