On how a tattered tin captured one of the most significant periods in British history, and grabbed my utmost attention

Sat in front on me was a rectangle object, weathered and grey with a rough texture. Its faded marks gave it a nostalgic charm, the kind of nostalgia associated with childhood delights. Its san serif font neatly arced across the side in a burlesque red assured me that it was a late nineteenth century artefact, something most likely enjoyed by the rising Victorian middle classes. ‘Twenty-One Royal Appointments’ says the top of the tin in serif lettering, with this Royal connotation I made the assumption that this tin was more than a biscuit tin. It resembled the golden era of British imperialism, but its legacy now rests on a rusty biscuit tin. Quite the statement, wouldn’t you say? 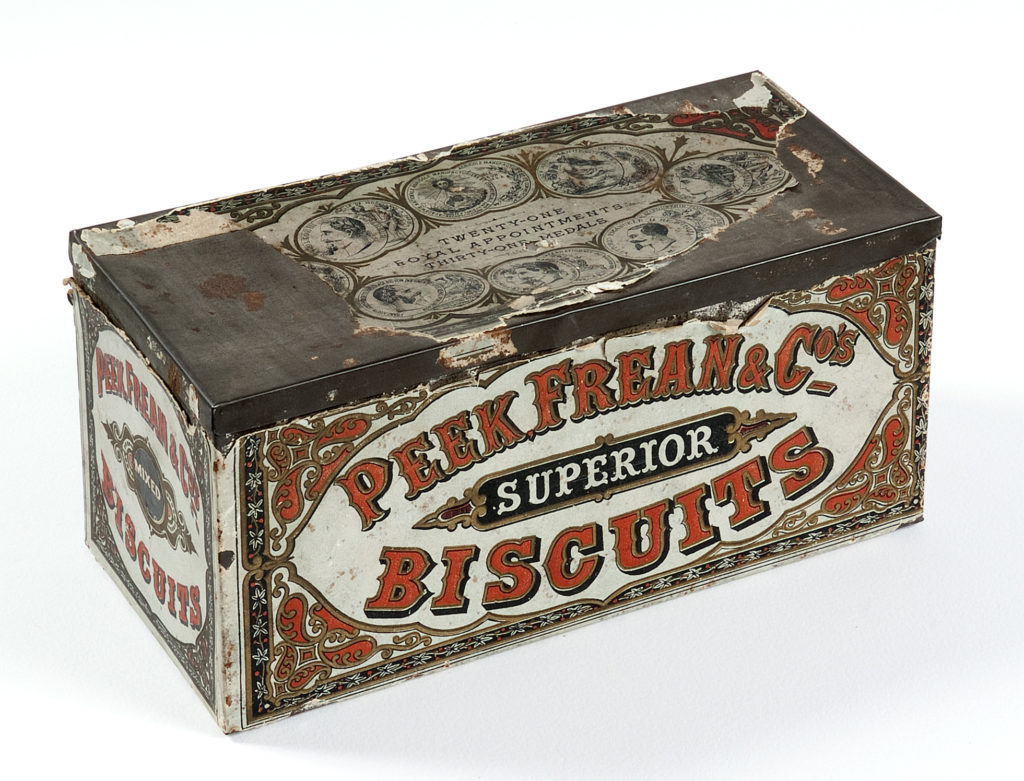 Click on the image to see the record for the Peek, Frean & Co biscuit tin from MoDA’s Charles Hasler collection

Plucked from the arms of the Museum of Domestic Design and Architecture, the Peek Frean & Co biscuit tin symbolized much more than warm coated Victorian goods, its empty interior evoked for me the passing of a defining era in British history. A nation considered a thriving world power as it voyaged both domestically and globally, shackling nations as it sailed from one to the next, unwilling populations adopted by British rule and colonial reinforcement, yet I remain dubious. Gazing at the biscuit tin I find myself contemplating the moral boundaries with regards to the concept of expansionism and whether it compromises communal or self-interest. Does the idea of a westerner venturing across oceans suggest personal adventure or does it suggest malicious imposition? On the contrary does this tin symbolize Victorian melancholy or does it signify the redundancy of imperialism? For me all I see is the remains of something that our ancestors would have regarded as an integral part of our British identity, but times have changed.

Nowadays the way in which we engage with our imperial history is through text books and the occasional glorious moment when your history teacher would put on an hour long documentary; usually voiced by Stephen Fry. Ironically British imperialism has become a foreign subject in many ways; we are led to assume that it is a part of British history that we should regard with pride but also subtle dishonour. The disconcerting notion that peoples were unwillingly dragged under the decree of foreign powers for economic and trade purposes is immoral, unjust and quite frankly inhumane. So in perspective it is clear why colonialism is regarded as a distasteful piece of British culture and history.

In this day and age dusty cupboards are now home to many biscuit tins; they sit filled with not baked delights but instead random household tat such as threads, needles and just general fluff. I think that as we come into the festive season we should treasure our beloved biscuit tins and fill them to the brim with biscuit joy as we cuddle inside for what is set to be a bitter winter. Nonetheless take time to contemplate the very surroundings that comfort you, the people, the places and the history. You may wonder why I’ve dabbled into colonialism and its tangled debate after looking into an old biscuit tin, it’s absurd I know. However, I find that in everyday life we walk past things with an oblivious strut, with our eyes stuck to our screens and our headphones jammed in our ears. Even the smallest of things can spark interest. Me? Well I just liked the look of a biscuit tin. What will you find?

Jamie reflects on the writing process

I’m interested in every aspect in journalism from reporting to broadcasting and being at Middlesex has allowed me to explore every avenue of journalism.