Staring at the stencil, layers of a mind-warping visual unfold. The katagami cutout, housed in the Museum of Domestic Design and Architecture (MODA), at first glance seems an abstract optical illusion, its two-toned linear patterns almost moving on the surface. On closer observation, individual sparrows, each unique, emerge from the background. 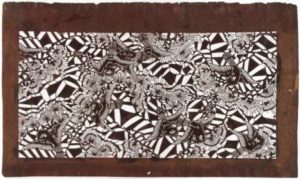 This Japanese stencil dates back to around the 1860s and is one of 400 from the Silver Studio Collection. The Silver Studio was a design house in the UK that produced both wallpaper and textiles, helping to infuse Japanese influences into British décor in the 1890s. The designs made their way into everyday British homes and were sold and mass-produced by numerous companies including Sandersons, Essex & Co and Liberty.

The pattern of pine tree branches coupled with the swirling sparrows in this particular piece produce an uplifting sensation and the small fan like designs around the birds instill an airy elegance. The contrasting areas of heavy detail against the larger shaded shapes are spaced in such a way that the stencil appears balanced to the eye despite having no structured pattern. It does not require imagination to picture the sparrows in flight with the stencil’s sense of depth and movement from its aerial perspective.

This Katagami stencil shows an effortless balance between hard-edged shapes and elegant swirls. The artistry involved in using angular patterns within a more rounded flowing image produces a surreal optical illusion. Because of this, the image can be perceived differently based on the distance it is viewed from. As you step closer, the birds emerge from the background and the more geometric shapes take precedence. Farther back, the flight pattern pops off the stencil and the contrast comes to light. The stencil’s ability to play with perception and proximity make it excitingly dynamic.

Cecilia reflects on the writing process

Writing this piece has been a valuable learning experience, particularly in terms of the editing process. Having valuable mentors guide me through the development of my writing helped strengthen my journalistic skills. With some experience in writing for a broad audience, I hope to write more about visual art as well as social psychology geared toward the general public in the future.