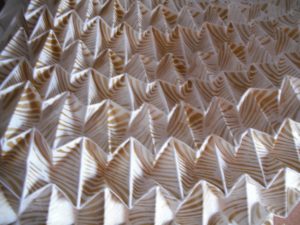 Designer-maker Caroline Collinge was one of the participants in our Katagami in Practice project.

Inspired by Japanese paper stencils used within traditional textile printing of kimonos, Caroline’s film Waves draws on the rich textile culture of Japan and the traditional art of paper folding ‘origami’. The title of the piece was suggested by the water and wave inspired patterns that are a common motif within the katagami stencils.

Caroline worked on the filmed dance performance with dancer and choreographer Masumi Saito. The dance, entitled Waves, is a costume-led performance involving one performer and the large scale paper folded/cut costume.

The costumed performance explores the architecture of a paper costume that incorporates katagami and origami techniques within the making of the textiles. The costume itself was made from 20 meters of Japanese mulberry paper that was intricately folded and cut before being fashioned to a kimono design with an extended skirt. The folded textiles for the costume used a traditional Japanese fold, ‘waterbomb’ fold, and a circular fold thought to originate from the Bauhaus School of Art and Design, Germany 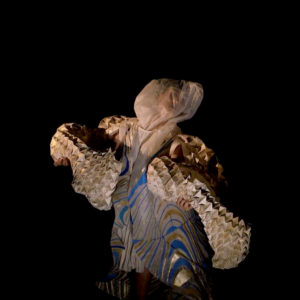 The performance explored how costume can combine with the performer’s movements to create a sequence of transformative forms originating from the costumed body. The film is non-narrative and is mainly an audio visual spectacle for the eye that celebrates colour and movement supported by an accompanying soundscape. The style of the film is inspired by early moving pictures and the documentation of the choreography and costumes of the American choreographer Loie Fuller.

Caroline’s costumed performance was filmed using digital technology; however, the production design draws upon nineteenth century early moving pictures of the Edison Film Company, who created some of the very first dance films.  Edison’s films were staged in a black box with minimal, natural lighting and a static camera using black and white film, and this was recreated for the filming of Waves. The effect of a black box was created using carefully positioned lighting, and was filmed using a static camera in the Middlesex University Television Studios.

Read more about Caroline’s creative process on her blog.

Students Rafael Marques Conceição, Alexandra Guerreiro Duarte and Klaudia Monika Slowik had worked together before but this experience brought them closer and proved to be an exciting learning experience for them. They interviewed Caroline on location in her studio and captured some of the rehearsals, as well as her reflections on her creative process. Their documentary film is called ‘Making Waves’. 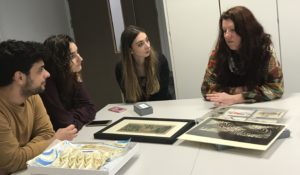 The student team learnt a lot from participating in the project, and we are delighted with the professional results that they have achieved.  The two films work really well together, exploring both the process of making a piece of artwork and the final outcome.

Read more of Rita’s reflections on the learning process on her blog.

Posted in #Co-Creation, #Katagami, #TVProduction by Zoe Hendon on May 2nd, 2018.