Deborah Sugg Ryan has drawn extensively on MoDA’s holdings for her new book Ideal Homes 1918-39: Domestic design and suburban modernism, which will be published by Manchester University Press in March 2018.

In this extract from the book she discusses the home of Ronald and Miriam Kingham, which is documented in MoDA’s collection.

In 1932 Ronald Kingham, a linoleum layer, and his wife of four years, Miriam, became homeowners for the first time. The couple were in their mid-twenties and had no children. They purchased 23 Bromley Road, Edmonton, Middlesex, a newly built house with three bedrooms, two reception rooms, a small kitchenette and an upstairs bathroom. As a skilled manual worker, Ronald’s income probably matched or even exceeded some of those in lower paid clerical occupations. 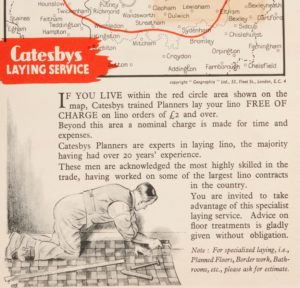 The Kinghams purchased the house directly from the builders, H. Smith Bros, for £699 (freehold) with a deposit of £49 and a mortgage for the balance from the National Building Society.   Assuming that as a skilled manual worker Ronald earned somewhere between £4 and £5 a week (between £208 and £260 per annum), the mortgage payments of 21 shillings a week represented between approximately 21 per cent and 26 per cent of his weekly income; the total purchase price represented between 2.7 and 3.4 times his annual income.

In the 1930s such smaller speculatively built suburban houses, the increased supply of which reduced houses prices, were affordable for purchase by the better off working classes and lower middle classes. House prices peaked in 1931 and started to fall in 1932, continuing to do so for the rest of the decade, representing a proportionately lower multiple of annual income than any time before or since.

Mortgages became cheaper and more readily available, making the 1930s the most favourable period for house purchase in England in the twentieth century. This brought homeownership increasingly in reach of those like Ronald Kingham on modest incomes from skilled blue collar manual trades and white collar work.

Recent work by economic historians has carefully unpicked the statistics that lie behind these facts. They have discovered that working-class owner-occupation was much more common than previously thought, especially after 1932.  As they have argued, the majority of houses built were much smaller and consequently much cheaper than previously claimed, with many breaking the minimum specifications of the Tudor Walters Report that set the standards for public housing in 1918.

working-class owner-occupation was much more common than previously thought

This is vividly illustrated by a close examination of H. Smith Bros’ advertising flyer for their houses in Bromley Road, which has a photograph of what appears at first glance to be a pair of semi-detached houses. In fact, what it depicts is the ‘end house’ ‘with room for garage’ on the left (also distinguished by its swept gable) and its neighbour on the right, which were the first two of a row of houses that were built in a terrace. This terrace formation reduced the plot size and frontages for the individual houses and kept the purchase price down. However, the advertising image played to prospective homeowners’ aspirations for semi-detachment and car ownership. 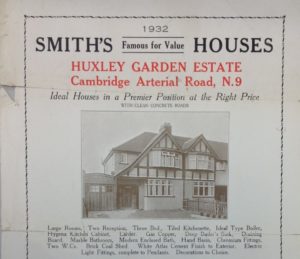 It was common for builders to feature the biggest houses in the best plots in their developments on their promotional literature. And, indeed, the Kinghams did not buy the house illustrated in the flyer; number 23 was located in the middle of the terrace, not on the generous end plot, and had no garage. In what follows, I consider how a young couple such as the Kinghams went about becoming suburban homeowners. As I show, homeownership brought with it anxieties about status and respectability. Critics, designers and architects despaired of popular taste and for them the term ‘suburban’ became an insult. Yet for the Kinghams suburban homeownership and homemaking offered both daunting and exciting social opportunities.

Deborah’s research provides a fascinating insight into the economics of homeowership in the 1930s, and the meanings of suburbia for some of its new inhabitants.  We look forward to reading more about the Kinghams and their move into home ownership when the book is published in March.