How were women portrayed in mid-century magazines?

Take Time To Be Young (produced by Good Housekeeping in association with Hoover Ltd), circa 1955, front cover (badda4149)

Looking backwards through the magazine and advice literature of the era, the late 1940s and 1950s can seem both enchanting and glamorous times to be a woman. Publications such as Good Housekeeping and Modern Woman show women invariably smiling, posing in colourful frocks with immaculate hairstyles in front of cakes, custard and jellies and with children who are often groomed to within an inch of their lives.

However, as the design historian Grace Lees-Maffei writes in her book Design at Home: Domestic Advice Books in Britain and the USA Since 1945 (p.2), ‘advice literature needs careful handling. It cannot be taken as direct evidence of past experiences.’ Instead these magazines and publications can be seen as tools used for social conditioning. 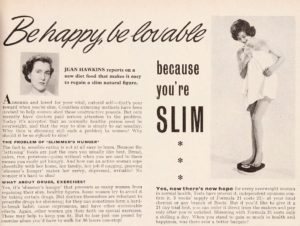 Indeed, looking through these types of magazines at MoDA an uncomfortable subtext emerges. In late 1942, Sir William Beveridge wrote an influential report outlining improvements for the living conditions of Britain’s citizens under the new Welfare State. Enshrined in this report were two assumptions that have shaped women’s lives into the present day. The first of these was the importance of marriage, and the second was the importance and role of housework. Both of these concepts are explicit in the literature of the era.

In the magazine Woman’s Own, columnist Monica Dickens wrote; ‘marriage is the goal of every female who seeks happiness . . . It was not intended by Nature that a woman should have to fend for herself. The instinctive desire of woman is to attach herself to a man who will be her provider.’ It is no surprise considering those remarks that qualities considered feminine, such as beauty, sex appeal and the ability to cook were heavily deployed in contemporary marketing and advertising within the pages of magazines.

This view was endorsed by the widely available 1951 publication ‘HOW TO GET YOUR MAN! For women only.’ Strategies outlined in this booklet include; ‘it is often necessary to lose in order to win. Men do not take kindly to being beaten by women at games’; ‘Don’t talk cleverly to him . . . Men are terrified of brainy women’; ‘be childlike and feminine at all times.’ In this highly gendered world-view, a woman who didn’t try her utmost to find a man for marriage was risking great unhappiness and likely future destitution. 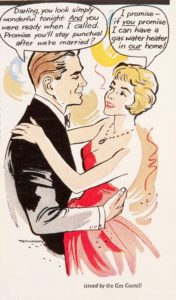 The second theme implied in Beveridge’s report was the importance and role of housework. In 1951, 22 per cent of married women had jobs, but being a stay-at-home mother was very much the norm, and it was very hard work. Mass Observation reports from that same year indicate the average amount of time suburban housewives spent on housework was 15 hours a day, often on a rigorous timetable.

All evidence suggests that many women took their cleaning and cooking duties extremely seriously, as a sense of righteousness and morality was bound up in housework.

Beneath the gleaming veneer of perfect homes was this punishing and isolating schedule. It is perhaps no surprise that the politician Edith Summerskill described the housewife as ‘one of the loneliest people in the country.’

These magazines and pamphlets can now seem antiquated and ridiculously old fashioned in their portrayal of women and stereotyping of gender. However 2017 is still a world where the gender pay gap exists, women from all walks of life are repeatedly judged on appearance rather than merit and the recently elected American president can publicly boast about sexually harassing women. It is therefore worthwhile using historic collections such as MoDA’s magazines as a benchmark to reflect on gender equality, how far this cause has come since the 1950s and how far it has yet to go.