Mamiko Markham was one of the participants in MoDA’s research project, Katagami in Practice: Japanese stencils in the Art School.  Her research used both conventional and infrared photography to examine the katagami stencils in MoDA’s Silver Studio Collection.  This helped to determine geographical origins, dates and makers. 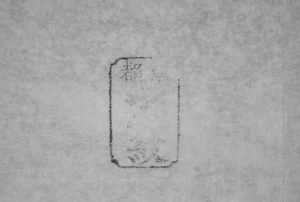 marks on one of the katagami stencils in MoDA’s collection, revealed by means of infrared photography

The katagami stencils at MoDA date from the late nineteenth century, and were originaly used for printing kimono fabric.  They are marked with stamps and calligraphic marks which tell us who made them, and where and when.  But these marks are not always visible to the naked eye, which is why infrared photography can help.  But even when we have a clear image of a mark, it requires careful analysis to understand exactly what they mean.

It is necessary to draw attention to the difficulties faced in recognising the stamps and writings on the Katagami. The Japanese language has three alphabets, Kanji – the ornate script, plus the two phonetic 50 character alphabets, Hirogana and Katagana.

Hirogana and Katagana have a number of characters which are similar in appearance, but present no problem when in context in prose, but could be confused in brief markings. The number of Kanji taught in school and required to read most of a newspaper is around two thousand.  A well-read person (such as a professor) may know in excess of five thousand. Unicode fonts contain in excess of 76,000 kanji, many of which are considered obsolete.

Because these stencils date from the nineteenth century, many of the kanji marks on the katagami stamps at MoDA are no longer used in modern Japanese. This is further compounded by the stylised nature of some of the stamps. All kanji is derived from script described by brush strokes and even when printed in a non brush-like style, the number of “strokes” in a kanji can be counted. 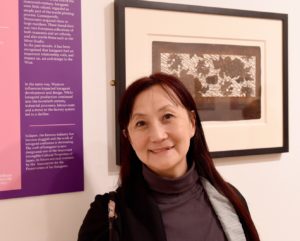 The stroke count can be used to help narrow down a kanji search.  However, at times it is still necessary to search through several hundred to several thousand kanji.

The calligraphy (hand painted script) is very problematic.  One problem is that like hand-writing it will be stylised; this is coupled with not knowing whether one is trying to understand current or obsolete characters. If these obstacles were not enough, deciphering kanji is further complicated due to the “readings”.  Almost all Kanji have many different ways of being pronounced. My name for example, having three syllables ma-mi-ko, has more than 52 different ways of being written!

Mamiko’s research revealed a great deal of new information about how katagami were bought and sold by merchants in Japan in the late nineteenth century.

See more about Mamiko’s research process in this short film.