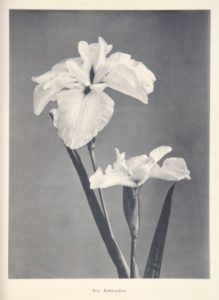 Photograph of an Iris from Some Japanese Flowers

All of the Ogowa volumes were sewn in the Japanese style for the European market in the late nineteenth century, or Meiji period. This was a time when trading with Japan became possible and had a significant impact on artistic production in that period. For more information on this, visit The Metropolitan Museum of Art’s Timeline of Art History on Japonisme.

Ogowa was a pioneer of the collotype reprographic technique for mass produced photographic images. Our edition of Some Japanese Flowers contains monochrome collotypes, but the publisher also developed a colour collotype method which he used to produce a deluxe version of the volume.

One edition of that is owned by the Getty Museum in the United States. The Getty Conservation Institute has done an in depth study of the collotypes in its collection, and the museum also republished their own version of Some Japanese Flowers.

A source of inspiration 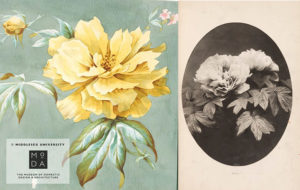 The Silver Studio’s designers used the Ogawa images as a source of inspiration in creating their designs for textiles and wallpapers.

It is easy to see why these volumes would have been useful to them.  In the 1890s the Silver Studio designers were creating interior fabrics for British market intrigued by Japanese style and exotic botanicals.

Many of the Silver Studio’s designs for wallpapers and textiles feature Japanese flowers, similar to those photographed by Ogawa.

Have a look at our Reading List for more information about the influence of Japan on the work of the Silver Studio.