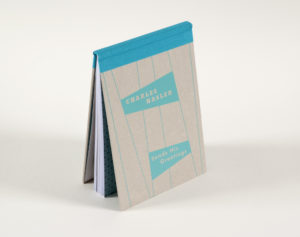 Charles Hasler Sends His Greetings is a taster of the many wonderful things contained in MoDA’s Charles Hasler collection.  The book’s author Jane Audas delves into the collection to highlight fifty rare and unusual items from Victoriana to mid-century modern.

Hasler (1908-1989) was a typographer and graphic designer. His collection reflects his magpie tendencies and wide-ranging interests: it contains all kinds of printed and paper ephemera, from Victorian postcards to examples of work by big-name contemporaries such as Abram Games and Edward McKnight Kauffer.

Eminent Graphic Designer, Professor Phil Cleaver, remarks that the collection is a fabulous resource for students since it shows something of the process of design (the messy, the unfinished, the work in progress) as well as the final product.  It is fascinating as evidence of the way graphic designers worked in the pre-digital age; everything had to be drawn by hand, and the collection as a whole was built up to meet the need for visual reference long before Google and Pinterest became available.

Although Hasler is not well known as a designer, he was certainly associated with the best designers of his times.  His collection includes rare examples of greetings cards, invitations and magazine covers by his friends such as Paul Nash, Barbara Jones, Edward McKnight Kauffer and Abram Games.

Charles Hasler Sends His Greetings: the Ephemera Collection of a Mid-Century Designer Foreword by Phil Cleaver, introduction by Zoe Hendon, essay by Jane Audas. Published by the Museum of Domestic Design and Architecture, Middlesex University, Sept 2015.