MA Textile student from Chelsea, Alex Beattie, was particularly inspired by some of MoDA’s 1920s wallpapers.

In particular, a wallpaper featuring pink flamingos really caught his eye.  His excitement at finding this wallpaper was clear.  He loved the colours and he was also interested in the way it had been printed, which helped to inform his own work:

Alex’s textile designs, featuring acid-bright colours and dream-like landscapes, show a clear progression from some of the things he looked at when he visited MoDA.

For Alex, “inspiration” wasn’t just about the emulation of motifs and colours.  In his video interview he talked in a really interesting way about looking to MoDA’s wallpapers to help him resolve technical issues to do with the creation of the illusion of depth and perspective in his designs. 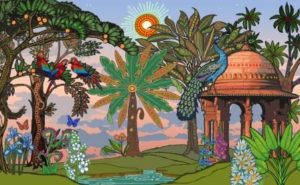 A printed textile by Alex for his degree show.

This was the wallpaper that particularly caught Alex’s eye: 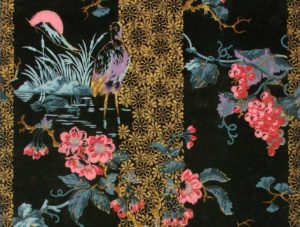 Wallpaper with a Chinoiserie stripe and flamingos, around 1925, Museum of Domestic Design and Architecture (SW2077).

Alex took part in the Inspiration Examined project at MoDA in 2014.